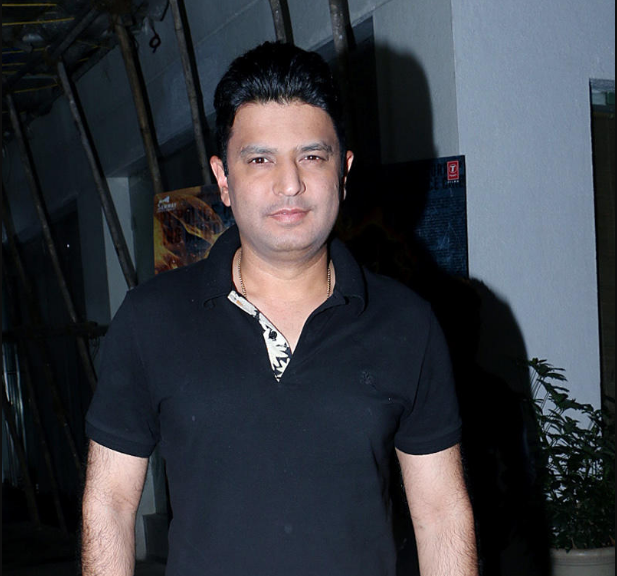 Bhushan Kumar married to Divya Khosla on 13 February 2005 at the Maa Vaishno Devi shrine in Katra. They have a son, Ruhaan (birthdate: 11th October).

Bhushan Kumar is 6ft (170cm) tall and weighs over 65Kg. He has 40inches chest, 32inches waist and 12inches biceps and black hair and eyes.

Kumar took control of the music company T-Series in 1997 after the death of his father Gulshan Kumar. He went on to become the Chairman and Managing Director of this number one music company in India.

As Managing Director, Bhushan Kumar diversified the company’s business into electronics, CDs, audio/video tapes and cassettes and film production. For this and for popularising Indian music overseas, he was honoured by the Government of India’s Electronics and Software Export Promotion Council.

After firming his company’s presence in the music market, Bhushan Kumar ventured out into making films.

Like his father, Gulshan Kapoor, who gave hits such as Aashiqui, Bhushan Kumar got on to make successful films such as Tum Bin, Bhool Bhulaiyaa, Patiala House, Ready and Lucky: No Time for Love.

Bhushan Kumar announced the successful franchise movie Aashiqui coming back as Aashiqui 2 released on 26 April 2013. Aashiqui 2 proved to be a turning point for Bhushan’s production house as it was considered to be one of the biggest blockbusters of 2013.

Bhushan’s projects are movies such as Yaariyan, a youth based film that will take you to the journey of your college and adolescent years, which is helmed by Bhushan’s wife Divya Khosla Kumar, with an entirely new star cast.

On 3 April 2017, he signed up a contract with Akshay Kumar in front of the famous 300-year-old Lord Shiva temple in Maheshwar for the movie Mogul, which is an official biopic based on the life of his father Gulshan Kumar.

On 13th October 2018, T-Series chairman Bhushan Kumar  filed a police complaint against an unknown person for levelling sexual harassment allegations against him, reported ANI. Kumar had earlier denied the charges while his wife, actor-producer Divya Khosla Kumar had defended him saying people were against Lord Krishna too.

As part of India’s #MeToo movement, an anonymous account had emerged on Twitter earlier this week in which an aspiring actor claimed Kumar demanded sexual favours from her in exchange of signing a three-film deal. Kumar, in a statement to PTI, had dismissed the allegations as malicious.

Bhushan Kumar said, “My name has been falsely dragged in the #MeToo movement, which is currently sweeping the country’s landscape,” the complaint, dated October 12, stated. “The post makes serious allegations against me that three years back, I had offered an aspiring actress to sleep with me in lieu of a role being offered in my films and when she refused, I dropped her from the films.”

Aamir Khan also walked away from T-Series’ film Mogul after an old complaint of molestation against its director Subhash Kapoor resurfaced.